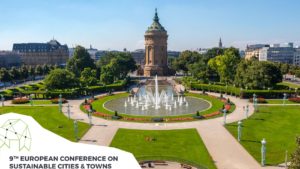 Co-hosted by the city of Mannheim, Germany, the 2020 conference will take a decentralised and bottom-up perspective that begins by identifying cities and regions as key actors towards urban transformation processes. The conference will also call for increased ambition of European and global frameworks for sustainability and climate change, with a particular focus this year on the European Green Deal.

Mannheim/Freiburg, 2 September 2020 – The three-day conference will provide a platform for local leaders to share their knowledge and interact with other stakeholders working on creating a better urban future in Europe. The interactive online platform allows for more connection and networking opportunities than ever.

How can Europe achieve an inclusive and just sustainability transition through the new European Green Deal? During the three-day conference, participants will learn about where Europe stands in the fight against climate change. They will hear from pioneering sustainable cities, and explore alternative economic models and discuss digitalisations ever-increasing role. The practical and actionable focus of the conference will result in the Mannheim Message, outlining next steps for European cities and towns on implementing the European Green Deal.

Plenary and Policy Panel sessions will explore topics from a broader level with engaging discussion among experts. Confirmed speakers include Prof. Dr. Dirk Messner, President of the German Environmental Agency; Lilyana Pavlova, Vice President of the European Investment Bank, and Anne Katrin Bohle, State Secretary of the Federal Ministry for the Interior, Building and Community (Germany). Some of the topics of these sessions include climate justice and resilience, the role of digitalisation for a sustainable future, the tension between economic systems, and the role of Climate Pacts as a tool in the sustainable transition process.

Conference attendees will have an opportunity for more hands-on learning through Solution and Toolbox sessions, where they will gain concrete tools to help face sustainability challenges in their cities. Among other topics, attendees can expect to learn about clean urban mobility; the development of policy for sustainable energy transition; socially responsible public procurement, and how to tackle plastic, construction and bio-waste from a circular perspective.

Inspiring contributions to the conference will come from speakers like Bernice Notenboom, Polar explorer, climate journalist and filmmaker, and Lamia Kamal-Chaoui, Director of the OECD Centre for Entrepreneurship, SMEs, Regions and Cities. City leaders like Peter Kurz, Mayor of Mannheim; Erion Veliaj, Mayor of Tirana; Thomas Kastrup-Larsen, Mayor of Aalborg, and Martin Horn, Mayor of Freiburg, will provide a localised perspective, by speaking about the sustainability transformations taking place in their cities.

“The need for accelerated transformation causes anxieties. These mainly concern people’s economic and social security and living culture. We urgently need to discuss and act upon necessary changes in our society in order to support cohesion and acceptance of change. The chances for this are better from a local and community perspective than from a global, European or national level,” highlighted Wolfgang Teubner, Regional Director, ICLEI Europe.
The City of Mannheim will co-host the 9th European Conference on Sustainable Towns & Cities, co-organised by ICLEI – Local Governments for Sustainability, with the support of the German Federal Minister for Environment, the European Investment Bank, European Committee of Regions, Baden-Württemberg Ministry of the Environment, Climate Protection and Energy Sector, Aalborg Municipality and Urban Europe.

The City of Mannheim Mayor, Peter Kurz, strongly believes that global changes are most effective when they are rooted at the neighbourhood level, close to inhabitants. Thus, the City of Mannheim is taking responsibility to localise the Sustainable Development Goals (SDGs) and to put the European Green Deal into action. Mannheim2020 will be an important political occasion for the city to discuss urban development and derive political scope for action.

The 9th European Conference on Sustainable Cities & Towns will build on the legacy of the previous conferences in Aalborg (Denmark, 1994 and 2004), Lisbon (Portugal, 1996), Hannover (Germany, 2000), Seville (Spain, 2007), Dunkerque (France, 2010), Geneva (Switzerland, 2013) and the Basque Country (Spain, 2016). Over 1,500 representatives from local and regional governments, European and international institutions, multilateral organisations, members of the research community, private sector and civil society are expected to take part in the event.