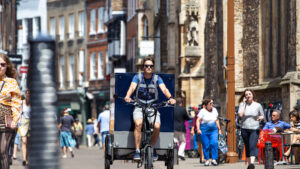 While collection vehicles typically tot up 298 g of CO2 for every mile, Zedify’s bikes emit zero C02, no matter how many journeys they take. They also help to avoid congestion and delays caused by waiting in traffic queues. The scheme has been welcomed by the environmentally-conscious city to help reach its goal of becoming carbon neutral by 2030.