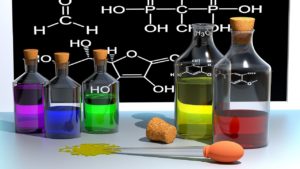 Chemical recycling usually refers to technologies that break down used plastic with some combination of heat, pressure, depleted oxygen, catalysts, and/or solvents into either fuel or building blocks for new plastic. Although the term “recycling” should only apply to processes that turn plastic back into plastic, the petrochemical industry also refers to similar processes that produce fuel as “chemical recycling” or, more recently, “advanced recycling.”

Pyrolysis and gasification use heat to break down plastic, with limited oxygen to prevent combustion. Although they can operate on polymer mixes, both technologies produce poor quality products, such as contaminated, diesel-like oil from pyrolysis and low-quality producer gas high in hydrogen (H2) and carbon monoxide (CO) from gasification.

Solvolysis removes impurities from the plastic without breaking down the plastic polymers, and other solvent-based technologies break apart polymers into monomers. Each plant can only handle a specific polymer type, which limits its flexibility and efficiency and requires advanced sorting technologies for pretreatment.

The difference between plastic-to-fuel and chemical recycling

The oil and gas outputs of most of these technologies can either be burned as a dirty fuel or further processed to be made into new plastic. Although some companies do aim to produce polymers, the outputs are usually burned on site as turning them into plastic requires extensive decontamination and enrichment. Turning plastic into fuel (“plastic-to-fuel”) does not displace virgin plastic, and therefore cannot be considered a recycling solution; it does not contribute to a circular economy. If combusted, the products result in similar environmental impacts to other fossil fuels.

There is a profound lack of information available about the operation of these technologies under real-world conditions. Most studies are conducted on bench- or lab-scale processes, and only attempt to show viability of the process rather than evaluate the environmental impacts. This may be because additional operational challenges arise when the process takes mixed or non-standard feedstocks and when the companies attempt to scale up operations. Solvent-based and enzyme-based processes are at a much earlier stage of development compared to pyrolysis and gasification, and even less data exists on their efficiency and toxicity, especially the treatment of solvents after use.
Toxicity, environmental health impacts

Despite the data scarcity, the studies that do exist show that pyrolysis and gasification of plastic waste release toxic substances. Toxic additives and contaminants, some of which are already banned by national regulations, such as bisphenol-A (BPA), cadmium, benzene, brominated compounds, phthalates, lead, tin, antimony, and volatile organic compounds (VOCs) are often present in plastic. These are not effectively filtered out and permeate both the products and byproducts of chemical recycling. Other toxic chemicals that are newly formed during high-heat processes include benzene, toluene, formaldehyde, vinyl chloride, hydrogen cyanide, PBDEs, PAHs, and high-temperature tars, among many others.

These toxic substances are found in a variety of outputs: the pyrolysis oil, the producer gas, the char, the air emissions, as well as the ash and liquid effluent. In particular, the pyrolysis oil is far more contaminated with solid residue, dioxins, and PAHs than regular diesel. It requires substantial post-treatment cleaning even to be used as a fuel, as it produces greater quantities of oxides of nitrogen (NOX), soot, carbon monoxide (CO) and carbon dioxide (CO2) emissions compared to diesel in a standard engine. Cleaning the toxins from chemical recycling products is extremely difficult, expensive, and creates additional toxic waste streams.

For economic and regulatory reasons, chemical recycling operations are mostly likely to be colocated with existing petrochemical facilities. This will further increase the environmental health impacts on communities that are already subject to disproportionate, cumulative environmental burdens.

Chemical recycling technologies are energy-intensive, requiring large quantities of external heat and/or pressure even when they generate energy by burning some of their own products. In addition to the energy needed for pre-treatment of plastic waste and decontamination/upgrading the products, gasification and pyrolysis require external heat to break plastic down into gas, liquids, and solids. None of the operations has been self-sustaining and this is unlikely to change in the next few decades. Even more energy is required for the polymerization process to make new plastics; in order to turn a ton of fossil fuel into plastic, a ton of fossil fuel is required as an energy source.

CO2 emissions during the process

In addition to CO2 emissions associated with the external energy inputs, some of the chemical transformations themselves generate significant quantities of CO2. This is particularly the case for gasification, which loses more that half of the carbon in the plastic feedstock during the gas upgrading phase.

CO2 emissions from burning the outputs

As virtually all plastics are made from fossil fuels, any of the outputs ‒ including pyrolysis oil, producer gas, and char ‒ that are combusted are also fossil fuels, with CO2 emissions equivalent to directly burning plastic. Plastic production, processing plastic waste with a combination of high heat and chemical reactions, and burning the resulting products as fuel all result in a very high carbon footprint for chemical recycling.

More GHGs from the perpetuation of plastic production

In addition to the greenhouse gas emissions from chemical recycling, the push for this technological fix also perpetuates the over-production of plastic. The plastic industry is already poised to grow its production capacity by a third by 2025. Rather than limiting production or contributing to circularity, chemical recycling provides an excuse for increasing the production and disposal of plastic.

While pyrolysis and gasification are relatively well-understood for simpler feedstocks such as coal and wood, they continue to face operational problems in treating highly contaminated and mixed plastic waste feedstock. Their oil and gas outputs are heavily contaminated and poor quality, requiring extensive decontamination and enrichment to meet the standards necessary for use. Many academic and industry sources have acknowledged the lack of potential for economic operation of chemical recycling technologies.

Solvent-based technologies are even less mature. The existing lab-scale or pilot operations for which data are available struggle with high energy demands, high operating costs, large climate impacts, and toxins remaining in the products and the solvents. This latter problem forced the closure of the world’s only commercial-scale solvolysis plant in Italy.

While their application to plastic waste is relatively new, pyrolysis and gasification of plastic-containing municipal waste have been explored since the 1950s. For decades, attempts to convert mixed waste into energy through gasification or pyrolysis resulted in high-profile failures across the globe, including accidents such as fires and explosions, as well as financial losses. As of 2017, the technologies had wasted at least $2 billion in investments with canceled or failed projects. Many projects failed because of fragile revenue models, complications in obtaining permits, and high operating costs, among other factors.

Whatever the technology used, if the products are burned, the process cannot be considered recycling. Unlike plastic-to-plastic repolymerization operations, which produce new plastic and reduce the demand for fossil fuel extraction, turning plastic into fuel does not lessen the environmental impact of plastic production and use. The European Union’s Waste Framework Directive clearly excludes plastic-to-fuel from the definition of plastic recycling.

Even with the most advanced plastic-to-plastic technologies available at present, very little of the waste plastic becomes monomers; most is lost in the process or burned. The actual potential of plastic repolymerization is yet to be proven, and there needs to be strict regulation on toxins, greenhouse gas emissions, and residue management, among other concerns. In the meantime, mechanical recycling serves as a more well- established recycling option which results in less toxins and a smaller carbon footprint.

Evidence shows that “chemical recycling” is not a viable solution for the plastic problem. Technical, economic, and environmental problems abound:

In a society that urgently needs to transition from an extractive, fossil fuel economy to a circular one, chemical recycling is a distraction at best. Far more mature and viable solutions are to be found in upstream, zero waste strategies which focus on reducing the production and consumption of plastic.