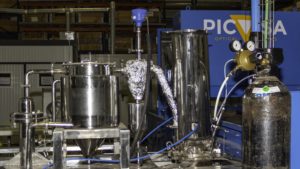 While versatility is one of plastic’s most attractive qualities, this can limit its ability to be recycled using traditional mechanical recycling methods for several reasons, including: 1) the many different kinds of plastic, 2) the presence of more than one kind of plastic in the same product and 3) some plastics are designed not to melt in order to increase their mechanical and thermal resistance.

Against this backdrop, Europe increasingly calls for greater circularity in industry and society in order to maintain resources in the production system and reduce dependence on third countries, thus fostering a growing need to develop new technologies and further develop existing ones to complement mechanical recycling with the aim of achieving resource efficiency and zero waste.

Chemical recycling is a recovery process in which plastic is exposed to different chemical, biological and temperature agents to break down its building blocks. It is then transformed into small molecules of interest to industry. Some of these molecules can be used as feedstock to make new plastic materials. Although they are considered recycled materials, they maintain all the properties and characteristics of virgin materials, including suitability for food contact.

By including chemical recycling, the new cycle for plastic products is now complete and offers new opportunities.

Chemical recycling is now a reality and an increase has already been observed in recycling statistics in European countries such as Germany, as shown in the following graph. However, figures are still low and major research funding is necessary.

The solvolysis/depolymerization process is carried out by adding different chemical agents, temperature and/or pressure to obtain monomers and oligomers. The products obtained vary depending on the chemical agent and reaction conditions used to break the polymer chain. For example, PET waste can be used to obtain monomers and oligomers that go through a second polymerization process to become new, recycled PET with the same amount of waste. If the conditions are modified, monomers can be obtained to synthesize and polymerize polyurethane, and an unsaturated polyester resin can also be obtained.

This technology was used in the FOAM2FOAM Project within the framework of the I+D Retos Colaboración Spanish call for recycling post-consumer polyurethane waste from different sources, such as electrical and electronic equipment, and obtaining new polyurethane parts for the industrial sector.

One cracking processes is pyrolysis, which is carried out at high temperatures (usually above 400 °C) in the absence of oxygen. Three phases are obtained as the final product: a solid, liquid and gas. Depending on the mix of waste feedstock, different products can be obtained, such as carbon fibre recovered from reinforced thermoset waste. This process can also be used to produce fuel, in which case it is not considered chemical recycling, but is moved down a level on the waste hierarchy to waste recovery or energy recovery.

At AIMPLAS, different thermal cracking projects are being developed, namely LIFE ECOMETHYLAL and RECIPAM. The first is a European project demonstrating a gasification technology developed to treat mixed plastic waste and produce methylal, a product of great interest in industry as an additive for petrol and diesel fuel that eliminates emissions. RECIPAM is a regional project funded by the Valencian Innovation Agency (AVI) that demonstrates the recyclability of multilayer polyamide waste with other polymers such as polyethylene and polypropylene. In this project, both mechanical (e.g. compatibilization) and chemical (e.g. delamination, pyrolysis) recycling techniques are being used.

Finally, biological cracking is a promising technique, though it is in its early stages. It uses microorganisms to mineralize polymers and enzymes as biocatalysts to degrade polymers into monomers or oligomers. These techniques work on biopolymers, as well as conventional polymers.

AIMPLAS is currently working on the European BIOICEP Project to recover plastic products by using microorganisms and pre-treatments to optimize these processes, such as microwave treatment and reactive extrusion.

Other processes that are also gaining ground fall under the umbrella of chemical recycling, but are actually physical treatments in which solvent-based separation is used to exploit polymer solubility. This type of process is of interest for separating multilayers, eliminating adhesives and coatings, and even solving major problems such as the presence of legacy substances by minimizing and eliminating them.

The field of plastic product recycling is currently wide open and its endless possibilities will gradually manifest themselves in coming years to achieve Europe’s ambitious, but necessary goals.