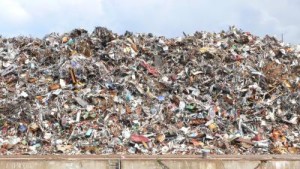 As a consequence, “we do see China’s steel scrap generation growing rapidly over the next decade”, guest speaker Ian Roper told the BIR Ferrous Division webinar on October 14.

The presentation made by Mr Roper, who is General Manager of Shanghai Metals Market, suggested a generation figure for China of more than 350 million tonnes per annum by the end of this decade. “We are expecting obsolete scrap volumes to be growing 10 to 20 million tonnes a year,” he noted. Alongside increasing scrap generation and collection, China was massively boosting its electric arc furnace capacity, with “60 million tonnes of new projects coming on in the next few years”.

Although steel scrap shipments into China are banned at present, discussions have been taking place about a possible reclassification that would enable imports to resume. However, as Mr Roper stressed, a similar reclassification process had begun some time earlier for certain non-ferrous scraps but official sign-off from customs was still awaited. Despite recent news reports to the contrary, Mr Roper insisted: “We are not anticipating steel scrap being allowed into China from early next year. We think that ultimately there will be a change – some kind of reclassification – but that is more likely to happen at the end of next year.”

In his “World Steel Recycling in Figures” update for the January-June 2020 period, the BIR Ferrous Division’s Statistics Advisor Rolf Willeke noted that China’s steel scrap usage for crude steel production dropped to 93.75 million tonnes in the first half of this year from 101.13 million tonnes in January-June 2019, but he also emphasised that the country’s steel scrap consumption had been 25.7% higher in this year’s second quarter when compared to quarter one.

In a series of market reports, Zain Nathani of the Nathani Group of Companies said ferrous scrap demand would remain “subdued” in India for the remainder of the year whereas Pakistan and Bangladesh had been receiving regular bulk and containerized shipments from major exporters such as the USA, the UK and Japan. Denis Reuter of Germany-based TSR Recycling GmbH & Co. KG noted that scrap prices had been generally stable in most European countries at the start of October while Turkish mills had enjoyed some success in pushing prices lower. And providing the US market report in the absence of George Adams of SA Recycling, his company colleague Tom Knippel said scrap intakes were now similar to pre-COVID levels but mill capacity utilization rates were down from around 82% in 2019 to below 70%.

Representing South Africa’s Metal Recyclers Association (MRA), Quintin Starkey confirmed that his government had implemented a modified preferential pricing system for scrap, to remain in place until an export tax was introduced some time in 2021. The MRA was lobbying the government to adopt an ad valorem duty of 10% on ferrous scrap and 5% on non-ferrous scrap with a duty-free rebate system for metals not consumed locally and/or when supply exceeded demand.

BIR Ferrous Division President Greg Schnitzer of US-based Schnitzer Steel Industries Inc. told webinar viewers that everyone should be “proud” of how the scrap sector had withstood some “difficult” conditions over the course of 2020. And he added: “It’s nice to see worldwide demand for scrap and buyers we haven’t seen in years.” He looked forward to a “strong finish” to 2020 carrying forward into 2021.