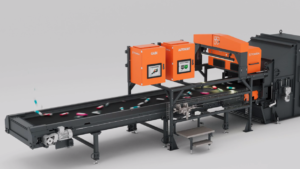 By classifying objects from sensor data, Gain enables the sorting of objects which could previously not be separated with high levels of purity and without compromising the throughput speed of the sorting machine.
The first version of the Gain technology to be released by Tomra is specifically developed to eject PE-silicon cartridges from a polyethylene (PE) stream by using camera information. On grounds of silicon remaining in the cartridges, separating those cartridges from the wanted PE material is necessary in order to purify the sorting result.

In addition to detecting common forms of silicon cartridges, Gain can also detect smaller double-cartridges, mostly used for two-component adhesives, as well as deformed or partly destroyed cartridges. Thanks to Tomra’s machines separating materials by air jets, even clustered cartridges can be sorted out, a task that even the fastest picking robot arms that are currently available on the market are struggling with.

The new technology was trained for this task with thousands of images and achieves an overall ejection of 99% of the cartridges using two systems in a sequence.

The Gain technology will be made available as an add-on option for the company’s Autosort machines.