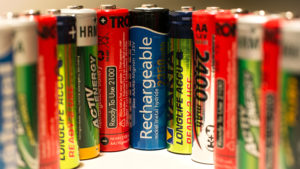 LIB performance is especially dependent on the active cathode material, which commercially consists of one of a handful of electrochemically active compound types containing Co, Ni, Mn and Fe in different proportions, in addition to Li. A significant number of researchers have tried to design processes to repair or recycle cathode materials in spent LIBs.

There is also a mechanochemical process, which is basically using grinding or other mechanical means to prepare the cathode into ready-to-separate/recover form but its use is quite rare. The chemical separation step is broadly broken into hydrometallurgical and pyrometallurgical methods. Hydrometallurgical technologies implement metals recovery from the black mass by acid/alkaline leaching, precipitation, solvent extraction and/or ion exchange resins. These processes involve harmful chemicals, generate huge effluent volumes, and consume large quantities of water, all of which have negative environmental and cost impacts.

Carbothermal reduction of iron oxides is one of the oldest technological processes that has defined human history during the last millennium or so, since the beginning of the Iron Age. Interest in the study of solid direct reduction of iron oxides is supported nowadays with its increased industrial application for the production of sponge iron or direct reduced iron for ferrous and other non-ferrous operations. It is no wonder that the mechanism of this reaction (and similar processes of carbothermal reduction of Co, Ni and Cu oxides) has been the subject of a myriad of studies during this century. Several mechanisms have been proposed to explain the interaction of two solid reactants (oxide and carbon) at temperatures of around 800-1,100°C with the formation of solid metal. The oldest and most widespread is the mechanism of oxide reduction through gaseous intermediates CO and CO2 in accordance with the following reactions:

In the beginning of the 1980s, L’vov suggested a reaction mechanism of oxide reduction through gaseous carbides formed via the interaction of metallic vapours with carbon.

This mechanism has been supported by the direct observation of metallic and gaseous carbide vapours by mass spectrometry. It has been used for the interpretation of temporal oscillations in the kinetics of interaction of carbon with the oxides of different elements. However, contrary to preliminary expectations, this mechanism cannot be applied to the reduction of Fe, Co, Ni and Cu oxides owing to the low saturated pressure of metals at high reduction temperatures and the impossibility of transportation of metal vapour to carbon in line with reaction.

Digonskii subsequently proposed a mechanism of reduction through gaseous intermediates of H2 and H2O:

Hydrogen in the reaction mixture generates from the water vapour adsorbed on the surface of carbon. However, there is still some skepticism on the presence of H2 in quantities which are necessary for the reduction to occur efficiently, especially under vacuum conditions. Baikov, Tammann and Sworykin and Baikov and Tumarev tried to employ a high temperature dissociation model for explaining the carbothermal reduction mechanism in accordance with the following reactions:

However, the equilibrium partial pressures of oxygen for reaction is ultra low to explain real rates of reduction. For this reason, this scheme is usually not accepted by the majority of researchers.

The main conclusion from Lvov’s study is that the process of carbothermal reduction of iron, cobalt, nickel and copper oxides is actually the decomposition process typical for many other types of solid-state decomposition reactions. It can be described in the framework of the mechanism of dissociative evaporation of oxide material with the simultaneous condensation of metal at the oxide/metal interface. Some important features of the carbothermal reduction process, such as initial temperatures and activation energies, were quantitatively interpreted on this basis. The origin of the induction and acceleration periods in the development of reduction has been explained. The function of carbon in this process is to react with the oxygen liberated from the decomposition of the oxide, thus maintaining a low partial pressure of oxygen in the system. In other words, carbon fulfills the role of a buffer in this process. This conclusion is supported by an appearance of metals in the condensed phase and a higher than equilibrium partial pressure of oxygen in the high-vacuum experiments with Knudsen cells.

The concept of carbothermal solid-state reaction can be similarly applied to black mass or cathode active material which is recovered after physical separation of spent LIBs. Black Mass refers to the metallic component of the LIB cathode, which is rich in transitional metals such as Ni and Co, as well as critical materials such as Li. Below is an Ellingham
diagram showing a clear possibility of carbothermic reduction of Ni and Co at moderate temperatures of 500°C or more. However, Lithium cannot be carbo-thermally reduced as it has a very strong affinity for oxygen (as good as that of Al). The Ellingham diagram clearly indicates that there is room for selective reduction between Ni, Co and Li, and by controlling the temperature and partial pressure of oxygen, the process is thermodynamically feasible. Reducibility of an agglomerated black mass pellet can be defined as the ease of removal of oxygen combined with the metal molecule in oxide form. 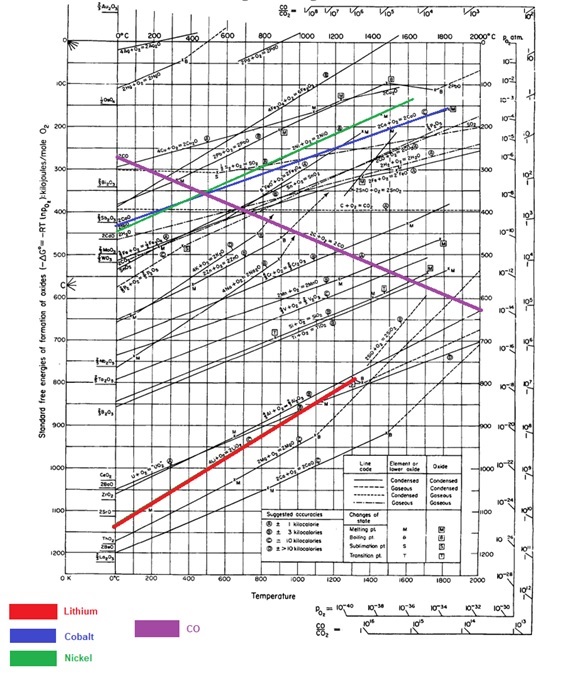 In as much as carbothermal reduction is thermodynamically feasible, for such a process to be practically applicable, kinetic obstacles such as high activation energy, long diffusion paths, low porosity, and other physical barriers need to be overcome. The molecularity of most of the involved reactions is 2 or more. But the overall reaction is a first order reaction (or pseudo first order reaction). As the order and molecularity of the reaction is different, it implies that intermediates are formed during the reduction process. Reducibility as defined before is the ease of removal of oxygen combined with the metal molecule in oxide form. The reaction is a gas-solid reaction and reduction in the interior of the black mass pellet is possible as a result of pores which form on the surface and allows gases to access the entire mass of the pellet to make the reduction viable.

Heat transfer in the reactor takes place by all three modes of heat transfer (conduction, convection & radiation). As the conversion of metallic oxides in the black mass to metals is endothermic, heat from freeboard gases gets transferred to the reaction zone to maintain the temperature. This heat loss from the freeboard gases is made up by combustion of CO into CO2. The entire gas coming out of the reactor is generated within the reactor itself. There is a net outflow of CO rich gas from the charge region to the free board.

A five-step shrinking core model for solid state black mass reduction has been conceptualized based on Levenspiel et al., and Alamsari et al.

If gaseous CO diﬀuses through a stagnant film onto the surface of the ash as shown in Figure 2, the flux of material, Q, can be defined as the flow of gas per unit surface area, or

where S is surface area (m2), N is the amount of CO in moles, kfilm is the gas film kinetic constant (m/s), C is concentration (mole/m3), and D is the molecular diﬀusion coeﬃcient (m2/s). The same equation can also be applied for diﬀusion of gas products (CO2 and H2O). 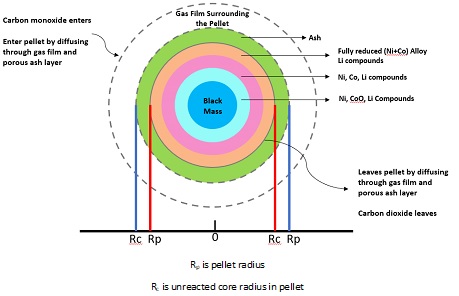 On the ash surface, the flux diﬀusion can also be stated as

where kash is the kinetic constant for the ash. Since Cash is diﬃcult to be measured, this variable must be substituted with a measurable parameter.

Assuming, steady state, the flow rate to the surface is equal to the reaction rate at the surface, thus

where kGAS is the overall kinetic constant on the gas film. This expression can be used as a kinetic expression of diffusion through gas film control.

This equation can be used as kinetic expression of diffusion through ash layer control. Here, ℘e is effective diffusion coefficient of gaseous reactant in the ash layer where Ap is pellet surface area and defined as Ap = 4πRp2 where Rp is pellet radius

Process Considerations in the reactor:

Based on the above thermodynamics and kinetics and mass transfer considerations, XProEM’s S3M process has been designed as shown in Figure 3 below.

2. Practically it is more complicated to balance thermodynamics and kinetics for industrial implementation

3. XProEM has mastered the Carbothermal reduction of black mass in every aspect and is implementing it in the most efficient manner for the purpose

4. Effectively with careful balancing between reaction thermodynamics and kinetics, it is plausible to control the extent of reaction and achieve any desired ratio of metal to oxide for specific types of metallic compounds, which will be highly conducive to subsequent treatment and processing of black mass