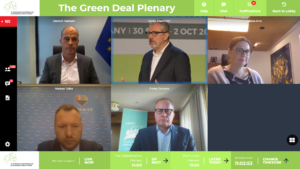 Diederik Samson, Head of Cabinet of Frans Timmermans, Vice-President of the European Commission, welcomed the document, “its principles and action-orientation”, stressing that “to make the European Green Deal a reality, it all comes down to the local level.”

During the second day of the 9th European Conference on Sustainable Cities & Towns – Mannheim2020, local and national authorities, and European representatives called for an integrated approach to reach the objectives of the European Green Deal. Highlighting the importance of sustainable urban development, the speakers of the Green Deal Plenary discussed how to work together towards its implementation.

The Mannheim Message welcomes the European Green Deal and its potential to become the new development model for Europe, its economy, society and environment, and highlights the critical role local and regional governments have to play in achieving sustainability goals, by offering their solidarity, cooperation and support for building a strong, united, sustainable and inclusive Europe. At the session, Dr. Peter Kurz, Mayor of Mannheim, presented it formally to the European Commission and to the audience.

“The Mannheim Message strengthens that local governments are key actors for the European Green Deal and explains how we are co-creating Europe’s future. To achieve these goals, joint work needs to be done, not only following a top-down approach, but also a bottom-up one. We should use the momentum to involve regions, cities and towns,” said Mayor Dr. Peter Kurz.

For the European Commission, strong local governments are key actors to reach the objectives of the European Green Deal. “All cities need to chip in and we want to make a strong connection between what we do in Brussels – making policy, disseminating money, adapting regulations – and what cities are doing on the ground,” said Diederik Samsom, Head of Cabinet of Frans Timmermans, Vice-President of the European Commission. “I think the Mannheim Message takes us forward and I believe we need inspiration from what is being done at the local level.”

The State Secretary of the German Federal Ministry of the Interior, Anne Katrin Bohle, presented a preview of the New Leipzig Charter, and how it links to the content of the Mannheim Message. “One of the main cornerstones of Germany’s EU presidency is urban development. This is captured in the New Leipzig Charter, which will be presented at the end of November, after two years of dialogue with stakeholders from all levels of government.”

“For the sake of our own future and future generations, we have to reorganise our lives in a way that does not continue destroying our planet. As we are challenged as individual human beings and as parts of society, we need mutual trust, solidarity and cooperation in order to successfully respond. This trust, solidarity and cooperation can only be built bottom-up, on a solid fundament of place-based solutions that are inclusive and co-created,” said Wolfgang Teubner, Regional Director of ICLEI Europe.

The voice of local authorities
During the session, Mariusz Skiba, Deputy Mayor of Katowice (Poland), reinforced that engagement and determination is needed to reach the Paris Agreement’s goals, as well as to become the first climate-neutral continent.

Minna Arve, Mayor of Turku (Finland), stressed the fact that “we have better possibilities than ever to advance sustainable development”.

These views were shared by other mayors in attendance, including Pekka Timonen, Mayor of Lahti (Finland), who agreed that the level of local ambition is key.

“Let us be bold and courageous in the way we transform our societies for the sake of our precious planet and future generations. This is why we, as Mayors and decision-makers of cities and regions, in the Mannheim Message ask for a new development model for Europe, its economy, society and environment,” said Martin W.W. Horn, Mayor of Freiburg and President of ICLEI Europe.