Food Waste: An Opportunity for Change 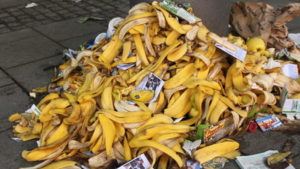 This is not an issue which has spawned from nothing. It is one which has been prominently circling for decades but, with the current situation, has been drastically exacerbated.

We are referring to food waste.

Britain, as a nation, is responsible for more than 4.5 million tonnes of food waste each year.
This figure will be simply incomparable with what we should expect to see come the end of the year when the 2020 waste statistics are produced.

Why, though, will the lockdown have such a cataclysmic impact?

As news of the COVID-19 outbreak in Italy began to feature on world news, British shoppers swarmed to supermarkets in search of hand sanitiser, cleaning products, and toilet rolls.

Dramatic? Well, according to grocery retailers around the UK — yes, absolutely. The rhetoric reiterated by supermarket chiefs across the country since news began to spread has been one of ‘keep calm and stop panic buying’.

Unfortunately, the message failed to filter through and as the weeks have passed, things have intensified. Waves of worried shoppers have flocked to supermarkets, buying as much produce as they possibly can, so much so that purchase limitations were introduced.

American information, data and measurement firm Nielsen reported that supermarket sales of groceries and personal products grew by more than 20%, with shoppers splashing out £1.9bn more on these items in the four weeks ending 21st March than they usually would.

The result? Over-flowing bins, spoilt milk, and leftovers lying at the back of the fridge well beyond their usable time frame. The general public and swathes of panic buyers are slowly beginning to recognise that they simply cannot utilise the mass of perishable foods they have purchased.

As of Friday, 20th March, British Prime Minister Boris Johnson announced that all restaurants would be forced to shut their doors. Ultimately, this caused a two-fold problem. Firstly, the number of people eating at home was going to increase, while, alternatively, the stock of restaurants would go to waste.

Waste management is something restaurateurs plan for. However, no one could have predicted these simply unprecedented times.

Usually, for restaurants, food waste sits at around 0.5% of all handled produce. But, with nobody coming through the doors, where is the food meant to go?

This is something which traces back up the food chain to the suppliers. Typically, this part of the industry will see produce arrive and then leave the shelves in no more than two days. Now, however, due to a significant drop in demand, lines of stock are simply having to be discarded.

What can be done

There are solutions. Despite so many more now cooking at home that were previously visiting restaurants, takeaway facilities are, in some part, filling this void. The benefits of this shift in business style are abundant, with staff avoiding unemployment, food waste being limited, and the risk of the virus being spread significantly reduced to restricted interaction.

That said, however, Andrew Shakman, CEO of Lean Path, a food waste reduction service in the US, indicated that “we can expect food waste per meal to increase for our customers when their sales volume are lower.” Therefore, takeaway services may negatively impact food waste in the long term.

Alternatively, when some restaurants closed their doors, instead of focusing solely on takeaway services, they chose to donate their food to charity or provide meals for essential workers. These outlets included the likes of McDonalds, Pizza Express, and Zizzi.

Meanwhile, apps such as Frupro — which focuses on changing the way we eat and the considerations we have for our eating habits, and their impact on the environment — have provided us with a further alternative.

In effect, the innovative app matches people who are buying and selling produce. The aim is to create a community where one person will say ‘I need it’, while another will respond with, ‘I have it’.

Food waste management businesses around the world have expressed their serious concerns regarding the Covid-19 situation however, an opportunity for change exists here.

Alongside staying at home, which is, of course, the important thing the general public can do at this time, we can all play a part in escaping from the habits we have got ourselves into.

Is there food in the cupboard or the fridge? If so, ask yourself the question, do I need to go to the shop and buy more?