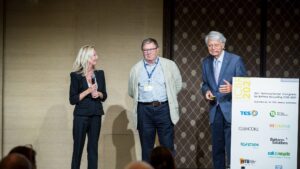 The ICBR Honorary award is granted to a person for remarkable commitment to, and outstanding achievements in, the battery recycling industry and its related fields: development of new battery recycling technologies and chemistries, environmental protection, the circular economy and sustainable development.

In 1977 Jacques David began his career in the battery recycling business and quickly became a pioneer in recovering nickel, cobalt and cadmium from Ni-Cd batteries in order to reintroduce them into their metallurgical cycle. Between 1995 and 2005 he became an expert in battery sorting technology and commercialized automatic battery sorting units for portable batteries through his company Eurobatri. He spent the rest of his career managing recycling facilities, building collection networks and furthering the cause of environmentally sound battery recycling.

Jacques David has participated in every one of the 26 ICM battery recycling conferences, sharing his recycling expertise, experience and global network widely within the industry.

ICM is very pleased to grant the ICBR honorary award to Jacques David in recognition of his pioneering spirit, his support for, and endless promotion of, best take-back and recycling practices in the Circular Economy of batteries.

“His lifelong commitment put the worldwide battery recycling industry on the path to a profitable and environmentally sound business model.” Jean-Pol Wiaux, Chairman of the ICBR Steering Committee.