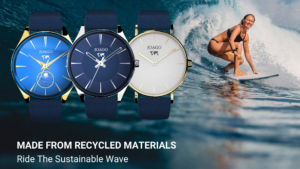 As we are running out of time to reverse the environmental issues we are currently facing, Joago watches have decided to contribute to a faster recovery of the planet. The brand was born in 2017 after the founders dived on a life-changing trip to Indonesia. With the purpose of surfing, they discovered the harrowing truth of ocean pollution in Asia. This was a realization for Pablo Garat and Jose Ruiz, no one was seeing the potential of ocean waste as something more than waste, except them.

On their return, they decided to give waste a second and eternal life, thus creating eco-friendly watches that adjusted to their green revolution and to the pocket of consumers concern with the planet’s wellbeing. Partnering with companies around the world for their manufacturing, Joago has chosen as part of their supply chain, a company located in Spain. This company is committed to producing with little impact on carbon emissions and hoping to achieve 0% by 2021. Their production process requires 50% use of renewable energy and 90% less water consumption than traditional manufactures. The watch straps are either made from ocean waste, recycled stainless steel (as well as the watch sphere), vegan velvet, and pineapple waste; which are acquired from communities in the Philippines. This way, they have created a reciprocal process in which locals benefit by making an extra income while waste is being removed from our oceans, and used in their watches.

For every watch purchased, Joago will remove 2 pounds (1kg) of trash from the ocean. They have developed three different models that promise to last a lifetime and remind us of our committment to the ocean.

Terra is the most affordable model of the brand, with 316 recycled stainless steel and a
Sapphire coated crystal with an anti-scratch surface finish. As well this watch has a 3 ATM reach, so you never have to take it off. This model’s straps and sphere are available in four different colors to satisfy everyone’s preferences.

This model’s name meaning “new beginnings” in greek has some additional extras such as the Japanese Miyota movement and Moon Phase ( which refers to the little circle with waves located on the sphere, featuring the sun and the moon when the time is right). This model’s straps are available in five different colors, while the sphere -which glows in the dark- is available in two different colors with 5 ATM reach.

This specific model is powered by Earth’s most sustainable resource, the Sun. Having all the elements of the last two models, what differs this watch from the rest is that it has a reach of 10 ATM. In order to accomplish a 6-month battery life, all you have to do is to wear it for three hours.

At Joago, the team is fully committed to keep pushing as much as they can to create a positive impact on the environment, so since its creation, they have also focused on the collection of waste in different locations around the world. With volunteers’ help, they have organized several clean-up events in Massachusetts (United States), Puerto Escondido (Mexico), Bali (Indonesia), Dakar (Senegal), Cadiz, Tarifa, and the protected national park of Donana located in Spain.

As they want their mission to leave a positive footprint on the planet, a percentage of the raised money will be directed to the creation of a non-profit organization in Dakar, Senegal; where the third and final founder of Joago Rafael Rodriguez Ndiaye, is native to. The non-profit organization will focus on the collection of trash -that will later be used for manufacturing the watches- and repopulate the coral reef ecosystems of the area. Finally, for the next campaign, they are hoping to come out with new recycled products that will revolutionize the way we see shopping in retail, can you guess what they will be?