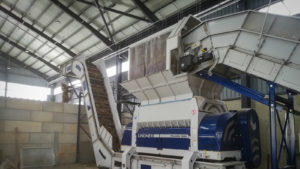 Vassiliko Cement Works is among the biggest industrial players in the island state and operates one of the largest and most advanced cement plants in Europe near Mari, between Limassol and Larnaca. To ensure the amount of energy needed to produce approximately 6,000 metric tons of clinker per day, the company relies on resource-saving alternative fuels from its associated company Enerco. ‘We are delighted to report that since we commissioned Lindner’s new Polaris 2800, it’s been possible to increase our waste treatment capacity for the production of alternative fuels suitable for Vassiliko’s calciner. We succeeded in more than doubling the quantities of local waste streams treated – without delay despite the ongoing difficulties,’ George Americanos, General Manager at Enerco, is pleased to say.

The new shredder, complemented by associated Lindner system components, produces on-site fuel with a particle size of approximately 50 mm out of end-of-life tyres, mixed and bulky waste as well as waste wood. This waste is regionally collected.

After 950 operating hours, Americanos takes stock: ‘We mostly process very tough materials. To do this, we need machines that can handle heavy loads and consistently deliver the required fuel quality long term. It’s for this very reason that we found the Polaris, with its powerful drives and robust construction, so impressive. Now, after the first few months in operation, we see that the performance exceeded our expectations. The average throughput increased by an extra 30% to what we had asked for.’