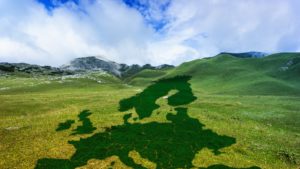 Ahead of the 9th European Conference on Sustainable Cities & Towns, local leaders from across Europe came together this week at the Mannheim 2020 Mayors’ Meeting to declare that cities must be engaged in the European Green Deal, and through the development of Local Green Deals. At the meeting, they launched the Mannheim Message, a call to involve local governments as real dialogue partners for policy development, not just implementation partners for policies that have been developed without them. The document will be formally presented to the European Commission on 1 October at the Mannheim2020 Conference.

The Mannheim Message welcomes the European Green Deal and its potential to become the new development model for Europe, its economy, society and environment, and highlights the critical role of local and regional governments in achieving sustainability goals, offering their solidarity, cooperation and support for building a strong, united, sustainable and inclusive Europe.

Five core systemic changes are proposed in the Mannheim Message: the transformation of current local infrastructure and systems; local development beyond growth and competition; cooperation, solidarity and inclusion; a lifestyle and culture of sufficiency and optimisation; and re-orientation towards the common good.

Based on these, Mayors and decision-makers of European cities and regions, promise to co-create and implement the European Green Deal together with national governments and the European Union (EU).

“The Mannheim Message addresses the systemic character of the transformation needed to achieve the goals of the EU Green Deal. It outlines a strong role for local and regional leaders to shape a just transition. Citizens are truly at the heart of the Mannheim Message – ensuring no one is left behind by taking into account the social consequences rapid change can ensue,” said Wolfgang Teubner, Regional Director Europe, ICLEI – Local Governments for Sustainability.

“The Green Deal needs to mainstream sustainability across all EU policies, ensuring that every piece of legislation can be delivered locally. The Mannheim Message reaffirms the commitment, political will and importance of the Green Deal by local and regional governments. If the Green Deal is not built and delivered with our cities and regions, it will not happen,” declared Apostolos Tzitzikostas, President of the European Committee of the Regions.

“The Mannheim Message is a clear statement that we are on the side of the European Union in order to achieve the goals of the Green Deal. The Mannheim Message is also a statement that we do not want to be only implementation partners for programmes, measures and regulations that have been agreed on without appropriate consultation with us. Therefore, we suggest a true collaboration to co-create Europe’s future for the well-being of our people today and in the future,” highlighted Dr. Peter Kurz, Mayor of Mannheim (Germany).

The Mannheim Message, which will be formally presented to the European Commission during the 9th European Conference on Sustainable Cities & Towns, at the Green Deal Plenary (October 1, 9:30 to 11:00 CEST), is now open for endorsement.