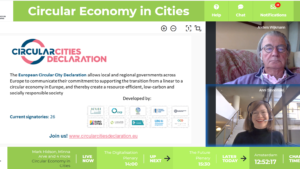 Cities and regions signing the declaration are committed to act as ambassadors and champion a circular economy that leads to a resource-efficient, low-carbon and socially responsible society, in which resource consumption is decoupled from economic growth.

Cities and regions are cradles of innovation and socio-economic transformation with an enormous potential to lead the transition to a circular economy. Local and regional governments manage a number of key sectors in urban areas, such as mobility and waste management, and are ultimately responsible for controlling land use and urban planning. As such, they are ideally placed to foster a circular economy and lead the way towards a more sustainable, resilient future. The European Circular Cities Declaration provides a common, shared vision of a circular city that helps ensure cities act as a joined force on the road to circularity.

The Declaration has been launched by Anni Sinnemäki, Helsinki’s Deputy Mayor for Urban Environment, at the 9th European Conference on Sustainable Cities & Towns – Mannheim2020, and launching signatories invite cities and regions from across Europe to join them in signing the Declaration.

“Helsinki is ready and willing to promote circular economy. Our declaration includes crucial fields for cities, such as construction work. Cooperation is essential in leading the transition: Helsinki is willing to learn more from other cities and also to share our own experiences,” said Deputy Mayor Sinnemäki.

“Our climate ambitions go hand-in-hand with a greener and more circular economy. Reducing our carbon footprint must go into everything. Products must be built to last a long time, to be repaired and from materials that can be reused. In that way, we avoid that valuable resources end up as waste,” remarked Lan Marie Berg, Vice Mayor of Oslo, one of the founding signatories of the Declaration. “The ‘cycles’ will involve new business-models, new value creation and new job opportunities.”

The Declaration has been developed by a broad group of European organisations committed to enabling the transition to a circular economy at the local level, including ICLEI – Local Governments for Sustainability, Circular Flanders, CSCP, ECERA, the European Investment Bank (EIB), Ellen McArthur Foundation, Eurocities, LWARB, UN Environment Programme and the WCYCLE Institute.

“Local and regional governments are key players in the transition to a circular economy and the involvement and the commitment of local and regional authorities is critical. This Declaration comes at a time in which leadership and concrete action is needed, and the signing Cities are calling on their peers to join them in this endeavour,” highlighted Mark Hidson, Global Director of ICLEI’s Sustainable Procurement Centre.

The Declaration reflects broader European efforts to rethink the way our economies and societies are organised. The recent launch of the European Green Deal showcases the European Union’s ambitious plans to become “first climate-neutral continent by 2050” and to transform itself into a fair and prosperous society where economic growth is decoupled from resource use and environmental harm. Such a transformation is both a challenge and an opportunity for Europe’s cities. With 75% of Europeans now living in urban areas, cities account for 75% of natural resource consumption, 50% of global waste and 60-80% of greenhouse gas emissions.

The Declaration offers several benefits to cities and regions willing to take that lead. Signatories will have opportunities for collaboration with peers, and become part of a powerful unified group of cities that will help raise awareness of the long-term political, societal, environmental and financial benefits of the circular economy, and contribute to the development of a supportive political framework.

The European Circular Cities Declaration is accompanied by a ‘supporting document’ which presents in more detail a common vision and understanding of what the circular economy transition will look like at the local level and which levers local governments can use to bring it about. It furthermore presents a list of useful resources that can support local governments in this process.