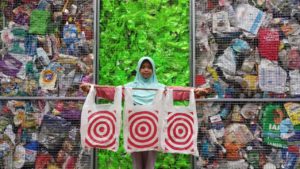 Due to recent amendments adopted by the 188 Parties to the Basel Convention, as of January 1, 2021, parties will be unable to import US plastic wastes unless they are very pure and unmixed. In its announcement, BAN highlighted recent data showing the US exports have not diminished despite the new rules and flagged three active shipments moving to Indonesia, Malaysia, and India. Already, there have been strong reactions against these pending shipments.

Malaysian Environment Minister Tuan Ibrahim Tuan Man, stated on March 20th, that Malaysia would prohibit entry of the waste, exported by Sigma Recycling Inc. which left the Port of Los Angeles on February 14th and is now on the CMA CGM ship Andromeda and is expected to arrive in Port Klang on March 27th.

In response, Mageswari Sangaralingam of Friends of the Earth Malaysia stated, “It is very clear that exports of Basel listed wastes from the US are now illegal because the US is not a Party to the Basel Convention. We applaud the government for taking action to quickly and properly implement their obligations under the new plastic waste trade rules.”

In Indonesia, the government appears to be uncertain as to what to do about the two containers of plastic waste that have already arrived at the port of Belwan on board a Mediterranean Shipping Company (MSC) vessel from California, USA. Three more from the same exporter — Newport CH International, are also on their way to Indonesia.

Yuyun Ismawati Drwiega, of the organization Nexus3 Foundation, called upon Indonesia to follow Malaysia’s lead to properly enforce the new rules. “Indonesia along with Switzerland have been the two countries forming the “Country Led Initiative” at the Basel Convention to ensure proper implementation of waste trade prohibitions and controls to protect communities around the world from costly pollution. We call upon them to continue to assume this leadership role in the current situation and enforce the new Basel plastic waste rules.”

Protests against the shipments have already begun and will continue on March 25th. A girls’ environmental activist group, mobilized to prevent a local river from being contaminated by the massive dumping of plastic waste, known as the River Warrior, will ride their bicycles from their village to the US Consulate. Aeshninna Azzahra, 14, co-captain of the group, will deliver a letter to President Biden there, calling on the US to halt all plastic waste exports to her country.

Meanwhile, the likely illegal shipment of PVC plastic waste on a Maersk Line ship heading to India is due to arrive on March 28th. Authorities there have been notified by BAN and allies.

Today the Break Free from Plastics Act has been introduced into the US Congress. This bill will, among many other things, ensure that the US abides by the Basel Convention rules even before ratifying the accord.

“We fully endorse the Break Free from Plastics Act and call upon the Biden administration to use their executive powers to prevent criminal trafficking in waste and promote the immediate ratification of the Basel Convention,” said Jim Puckett, director of the Basel Action Network. “President Biden has stated he is a champion of environmental justice. It’s time for him to put deeds behind words and uphold international law.”