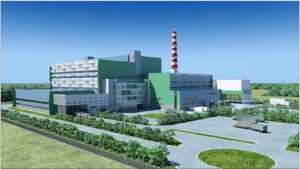 HZI and AEM will deliver all of the process technology, including HZI’s first-class combustion technology and state-of-the-art flue gas treatment. In addition, the consortium will be responsible for a range of overarching services and monitoring processes. This is HZI’s first project in Russia.

The idea of EfW is relatively new to Moscow Region and Russia in general. A total of four EfW plants (Moscow 1-4) are to be constructed on the city’s land over the next four years. Construction of the first plant has already begun around 80 km southeast of the city center. The new plants form part of the Green Tariff, a programme to promote renewable energy launched in 2017. In addition to subsidies, the new facility will be funded by waste disposal fees and the sale of electricity and bottom ash.

The EfW plants will help the city to optimise its waste management by closing and steadily reducing its many landfill sites. Each plant will process some 700,000 tonnes, this is a total 2.8 million tonnes, of residual waste per year, the waste volume from more than 5 million people, generating 75 MW of electricity per plant. Part of the electricity will be used to run the plants, and part will be fed into the grid supplying power to around 1.5 million people in Moscow.

The four plants will feature a similar design and state-of-the-art HZI technology that is already in use at several hundred sites around the world. This includes combustion with the HZI Grate, the water-steam cycle, and a multi-stage HZI flue gas treatment system that meets all European emissions standards and even falls well below the current limits.

Geographical factors pose additional challenges in terms of construction and installation. “The weather and climate here are different to Central Europe, for instance, and we have had to take account of this in the structural design,” explains Urs Altenburger, the Sales Manager responsible at HZI. Some technical systems that are normally placed outdoors have been moved indoors in order to protect them from the extreme cold in winter.

The construction of the four EfW plants will not only bring benefits for Moscow Region in terms of waste management. The local economy will also profit, since much of the equipment and materials used will be Russian. A large number of jobs will also be created. Around 130 people will be needed to operate each completed plant, and up to 800 will be working on each site at any given time during construction.