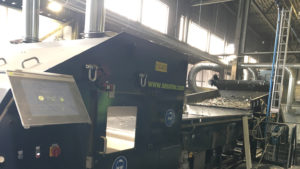 Established about 100 years ago as a small recycling company by Albert G. Sims in Sydney, Australia, “Sims Metal Management“ (SMM) has developed into a leading metal recycling enterprise with numerous locations all over the world. As part of the complete SMM group, “Sims Recycling Solutions“ (SRS) is responsible for the environmentally compatible separation and utilisation of electrical and electronic scrap and mixed metals. The company is one of the world‘s biggest e-scrap utilisation and recycling enterprises.

At its plants in the UK, in the Netherlands, in Germany and in Austria SRS has already been using Sesotec‘s Varisort sorting systems for many years. Integrated in the recycling processes these sorters are flexible solutions for the processing of electrical and electronic scrap. At its location in Eindhoven, Netherlands, SRS has expanded its capacities and now runs one of the region‘s biggest e-scrap recycling plants there. The expansions include their own metal and plastics recycling lines, which are equipped with Sesotec sorting systems for the separation of metals and plastics. SRS further processes the separated materials as secondary raw materials, which allows their renewed addition into the recycling cycle.

The recycling processes at the Eindhoven plant are exemplary for the complexity of the sorting requirements in the field of electrical and electronic scrap recycling. It is of particular importance here that shredded material is separated into pure material flows so that these can be fed into the raw material cycle again. Electrical and electronic scrap among other things contains metals (steel, aluminium, copper), plastics, and printed circuit boards.

“The continuous improvement of processes has top priority if secondary raw materials should be provided in high quality on a global scale. Sesotec‘s multi-sensor sorting systems allow a flexible adaptation to new and also more complex sorting requirements that result from more complex products on the market“, says Marc Afüpper, director of SRS, EMEA.