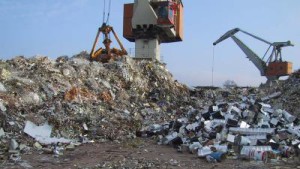 A new report (PDF), analysing a US$ 259 bn grouping of the world’s 20 largest steel companies, has found that the steel sector is failing to reduce emissions at the rate required to keep global warming below 2 °C – putting, on average, 14% of the companies’ potential value at risk.

More than 90% of metal produced in the world is steel, and the steel sector is responsible for up to 9% of global greenhouse gas emissions from fossil fuel use and industry – more than the entire emissions of India. With 650 million tonnes (Mt) of steel recycled each year, it is also the world’s most recycled material and as such has a central role to play in driving forward the circular economy.

Today’s ‘Melting Point’ (PDF) report, from environmental non-profit and investment research provider CDP, finds that there is a significant gap between company emissions reductions and the required trajectories for keeping global temperature rises below 2°C. To achieve this, the sector must reduce its emissions by 65% by 2050. However, cumulative company targets suggest a reduction of less than 50% by 2050.
Alarmingly, existing steel production techniques are already close to the limits of their efficiency and so meeting the goals of the Paris Climate Agreement will require a radical step change by the industry.

This is creating a material financial risk for steel giants. Approximately 86% of the sector’s production is covered by existing or planned carbon pricing markets and, given the scenario of a $100 carbon price by 2040, the average value at risk for these 20 companies would be 14%.

The report also reveals a significant geographical divide between the highest and lowest performing companies. European and East Asian companies have been proactive, setting ambitious emissions reduction targets and investing in a number of innovative low-carbon technologies. Chinese, Russian and U.S. companies lag behind in terms of disclosure and performance across most key areas and have demonstrated little evidence of developing low-carbon technologies.

Water is used throughout the steelmaking process so is crucial to the survival of the steel industry. It is therefore concerning that across the 20 companies, over 50% of inland steel capacity is exposed to high levels of water-stress risk, such as a decrease in supply of freshwater and an increase in the frequency and severity of extreme weather events such as drought. Company operations located in China and India are most at risk.

Encouragingly, some companies are taking steps to decarbonize and six of the companies have delivered technologies that could drive a step-change in emissions performance. These include:

Luke Fletcher, Senior Analyst at CDP commented: “The pace at which the steel sector is reducing emissions is too slow for the transition to a low-carbon economy and it needs to deploy and commercialise radical technologies if it is to avoid looming carbon costs and remain competitive. Recent events at British Steel are an example of the huge financial risks the sector faces and companies need to show evidence that strategies are being adopted to ensure resilience for the changes ahead. The good news is that technologies to decouple carbon emissions from steel production are emerging; from hydrogen steelmaking to electrolysis using clean electricity. Plus, the sector is already a global leader in recycling, with steel now the world’s most recycled material.”