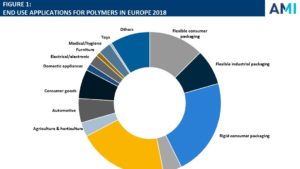 This subdued forecast masks a myriad of changes that the industry is facing. First and foremost, public outcry against plastic waste has intensified and policymakers have proposed a raft of measures to tackle the issue.

For example, the EU Commission is aiming to make all packaging recyclable by 2030, asking for the industry to voluntarily lead the way. In addition, in March 2019, the European Parliament signed off on legislation banning single-use plastic items such as plates, cutlery, straws and cotton bud sticks. The ban will come in to force in 2021. Plastic bottles will also have to contain at least 25% recycled content by 2025 and 30% by 2030. What is clear is that the floodgates have well and truly opened. Whether by legislation or due to consumer pressure, the packaging industry is facing significant adjustment in the coming years.

Aside from packaging, change is also being caused by factors specific to end-use sectors. For example, the automotive industry is going through a structural transformation with the rise of electric cars. Building & infrastructure and other sectors appear not to be facing such dramatic adjustments, but material substitution, changing consumer preferences and new technologies among other factors are still important trends influencing polymer demand.

Although there is change afoot in some respects, many fundamental trends remain. Western Europe is a mature market where economic progress can’t be relied on for driving growth; producers must continue to innovate and position themselves differently to succeed. Central Europe is a different story, with faster economic growth and rising disposable incomes helping to drive domestic demand to a greater extent. The region also continues to be an attractive investment proposition for manufacturers to supply the rest of the EU.

In Eastern Europe, the picture is different again. Russia’s international isolation and vulnerability to oil price shocks have meant that recent years have been characterised by uneven growth. Its policy of import substitution, however, is seeing it develop a number of chemical complexes with large nameplate polymer capacities, in addition to downstream processing. Certain other CIS countries are developing similarly vast investment parks. This approach is not new and many projects announced from 2010 to 2015 were cancelled, postponed or have not come to fruition as initially envisaged. Such plans must, therefore, be treated with a degree of scepticism, but it does appear that they will make a meaningful impact on the market.