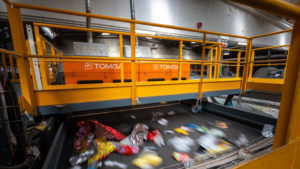 Masotina’s MRF was designed to treat municipal waste containing high volumes of plastic as a valuable resource, preparing it for subsequent reuse and recycling in line with the requirements of three Italian packaging and recycling consortia.

The company’s Corsico MRF boasts 32 TOMRA Recycling Autosort across three lines, which together enable the plant to process 250,000 tons of post-consumer and commercial waste plastics annually.

In 2014, TOMRA Recycling Autosort units were installed in a pre-sorting line and treatment line and later, in 2019, more units were added to support the addition of two further lines.

At present, the new main polymers line can process 15tph, the historical line between 7 and 10tph, and the Tetra Pak line 4tph, giving a total plant throughput of between 26 and 29tph.

Thanks to the accurate sorting carried out by Tomra’s Autosort units, in addition to recovering single-layer PET trays, the Masotina facility can also target and recover multilayer PET trays, with the end recovered fraction meeting the quality requirements set by Corepla for use as food-grade rPET. Corepla is Italy’s national consortium for the collection, recycling and recovery of plastic packaging.