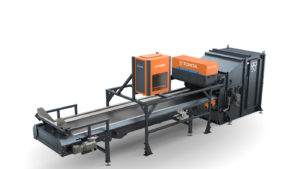 The product launches were originally due to take place at IFAT 2020, but with the event cancelled due to COVID-19, Tomra adapted its plans and instead launched the new products on a digital platform. The ‘Symphony of all Sorts’ theme was chosen to reflect the way in which the latest generation Autosort and its complementary products create a perfectly harmonised symphony to sort all kinds of waste with advanced accuracy and sophistication.

Based on the positive feedback received from delegates, Tomra Sorting anticipates high levels of interest in the most advanced model of its New generation Autosort system. The highly ultra-compact versatile sensor-based sorting system can be used across a vast range of material sorting applications. Compact, highly flexible and upgradable, Autosort brings together the very latest in TOMRA’s technologies to deliver advanced accuracy of complex sorting tasks at high throughput rates. The system can be easily integrated into any existing or new sorting processes, as a great number of initial pilot projects have confirmed.

Being equipped with the broadest range of sensors and using data to classify objects, the machine is capable of separating materials which are difficult, or even impossible to separate using conventional technologies. Incorporated as standard in the latest Autorsort is Tomra’s Sharp Eye technology which increases the light efficiency while maintaining the same energy consumption, enhances sorting sharpness and improves the separation of difficult to target fractions.

Optional technologies include the new Deep Laiser which stands out for its compactness and flexible range of uses. Its object recognition enables a deeper sorting sharpness to significantly improve the performance of the sorting process. Another application area is the use of Artificial Intelligence via Deep Learning. Deep Kaiser is one of the first fully integrated Deep Learning systems on the market.

With industry demand resulting in the need for higher speed conveyor belts, Autosort Speedair incorporates speed-controlled fan-driven air inlets that generate a constant air stream over the conveyor belt to prevent material on the conveyor belt from moving. By doubling the speed of the conveyor belts up to 6 metres per second, throughput is much higher and the output quality is consistently high. Customers benefit from a better return on investment, as well as lower installation and running costs. Additionally, as the first system on the market with no belt cover, access to the unit for maintenance is much faster and the likelihood of a material blockage is much lower compared to conventional high-speed systems in the market, as is the risk of machine downtime.

Looking beyond the launch of the new generation Autosort and Autosort Speedair, the third and final product mentioned at the event was the forthcoming launch of Tomra’s first robot, the Autosort Cybot. The system comprises a new generation Autosort scanner, an electromagnetic sensor and a robot arm. It is the first robot on the market that combines four technologies at once: Near Infrared (NIR) and Visible Light (VIS) spectroscopy, Deep Laiser and if required, induction for ferrous and non-ferrous metals recovery. Autosort Cybot’s robotic arm is capable of simultaneously sorting material into four different streams or fractions depending on the infeed material size, colour and criteria of the target fractions.

With sorting and recycling plants demanding even higher levels of automation than ever before, the Autosort Cybot will available soon and is another value-added component that complements the Autosort range, but can also operate as a standalone unit. Prior to its official launch, material tests can be carried out at Tomra’s Test Center to confirm its outstanding capabilities.