US plastic waste exports in violation of new UN rules 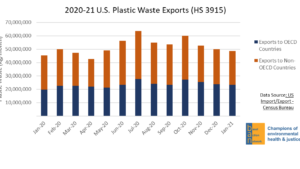 Plastics recycling in most developing countries is crude, incomplete, and highly polluting. Under the new rules, mixed and contaminated plastic wastes, or those containing PVC, that are routinely collected from residents in municipalities, small businesses, and recyclers, and that have in the past been freely traded are meant to now be strictly controlled. But, despite the new rules starting in January 2021, the first glimpse of the 2021 data shows that such exports to non-OECD countries (developing) have not diminished. Some, such as exports to Malaysia, have actually increased.

“Despite new global trade rules coming into force this year, our city, county, state, and federal governments appear to still be happily shunting their plastic wastes to horrific operations in developing countries, despite this trade now being illegal,” said Basel Action Network’s Executive Director, Jim Puckett. “Clearly, the Biden Administration has to step up at once and put the brakes on this form of environmental injustice.”

January 2021’s exports should have plummeted due to the new rules entering into force, making most of the trade illegal. BAN found instead that the January 2021 exports to non-OECD Countries were virtually the same as the January 2020 exports (25,700 metric tons, compared with 25,200, respectively). Exports to Malaysia actually went up from went up from 8,600 metric tonnes in December of 2020 to 9,800 tonnes in January 2021. The 2021 January amount alone, moving to non-OECD countries, is equivalent to about 4,834 sea-going containers.

While the US is not a member (Party) to the Basel Convention, and thus the new rules do not directly apply to US exporters, that also means that the 187 countries that are Parties of Basel are not allowed to import Basel controlled wastes from the US until the US joins the treaty. When the US exporters ignore the global rules, their waste shipments become criminal traffic as soon as the ships get on the high seas, and their trading partners can be prosecuted. Shipping lines also can be liable for carrying contraband.

BAN also found examples* (see attached report) of specific exports now on the high seas that are highly likely to be illegal. Due to the inability of US materials recovery facilities (MRFs) to achieve low contamination rates that are now required by the Basel Convention, combined with the fact that many known exports are bales of mixed polymers or include PVC, the exports to Basel Parties are almost certain to be violating the new Basel rules. For example, Malaysia will not accept loads with more than 5% contaminated loads (see attached report), yet a study by the government of California, shows that even PET (polyethylene terephthalate) plastic from MRFs is usually contaminated by more than 10% non-PET waste. Indonesia in another example found does not accept any level of contamination. Finally, in the third example, PVC plastic is on its way to India. Indonesia, Malaysia and India are all Basel Parties, unable to trade in these newly listed Basel wastes with the US (non-Party). BAN calls on these governments to seize these cited shipments if indeed they are found to violate the new Basel rules.

“We have found evidence already in the customs data of specific illegal shipments, and it’s highly likely, that once the shipments are inspected, a majority of it will be found to be illegal.” said Puckett. “Further, we have also found evidence that the shipping companies we have called upon to cease plastic waste exportation to developing countries continue to aid and abet this criminal trafficking in waste.”