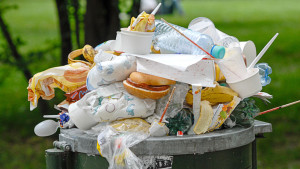 Many renters are reluctant to handle the doors or compactor buttons, choosing instead to leave their trash – and worse, bulk items—near the bins, creating more work for onsite teams and contracted waste hauling vendors, apartment managers say.

Door-step valet waste collections also have increased. Valet Living says team members are being informed of residents who have tested positive and are taking appropriate steps to protect all involved.

Some haulers such as Waste Management have relaxed some fees in some markets. Invoices for the March pick-ups have only recently been sent, but anecdotally, some apartment communities are estimating an average of 20 percent to 30 percent in volume increases. It’s as high as 40 percent in select situations.

Its Director, National Purchasing, Rick Pippin, says everything except for cardboard has increased. And although residents are certainly ordering plenty through Amazon, he says, because no one is moving out during this national shelter-in-place environment the residents aren’t generating a noticeable increase in box disposal.

His waste haulers typically charge $150 in overage fees each time a bin exceeds the level, but Waste Management, for one, has waived those fees through May in response to the Covid-19 circumstances.

“We have as many as 25 bins at some properties,” Pippin says. “This is saving us about $8,000 per week in expense. Waste Management also has not been enforcing some recycling contamination fees, so we’re kind of getting a mulligan on that, too. Every little bit helps.”

It uses Waste Management at 70 percent of its communities, and uses Republic, among others, elsewhere.

“I’ve not been notified of any fee discounts by my other waste haulers, but I’m still waiting for the next round of invoices. Maybe it will show up there.”

Camden has trash compactors at 100 of his communities, so overage there is not an issue.

Jana Alfiero, Sustainability Manager, Cortland, says her biggest issue has been residents not wanting to touch the doors to the bins or the compactor button.

“So, they leave their trash outside of the bin,” she says. “When others see this, they do the same. Our grounds crew needs to stay on top of this so we can maintain the Cortland standards of cleanliness.”

Alfiero says residents’ boredom due to being idle has led to them reorganizing their units, which leads to more bulk items, especially furniture.

“Our guys have to open the lids and put things into the bins because the third-party junk haulers like 1-800-Got-Junk aren’t picking up in a lot of places due to Covid,” she says. “In other cases, some waste haulers are only using one person per truck (not two) and that single person isn’t capable of lifting and disposing of bulk items. Haulers only have one driver because they have seen larger demand, so they have to use more trucks and spread out their staffs to make due.”

In some cases, he’s seeing overflow in the bins nearest to the buildings.

“The bins way in the back of the lot aren’t seeing waste piled as high,” Pippin says. “I’m fighting with those who carry the trash to the bins to even it out, telling them to walk a bit further before dumping, but there’s only so much you can do.”

Door-step trash pickup services are proving beneficial during this crisis. Camden has slightly increased its door-step pickups to five or six times per week. Alfiero says she’s having to remind residents often to tie the bags they place on the doorstep or they might not be picked up.

“Most of the increase is coming from A and B properties, where residents who typically would dine out more often or who would be away on business trips, are staying home more and are generating more trash,” he says.

Geographically, naturally, he says, the parts of the country that went into shelter-at-home policies saw the most noticeable spikes in volume in the days immediately after the announcement.

The day after Easter showed a 40 percent spike, Jacobs says.

Jacobs says apartment communities’ onsite staff are alerting his team, based on what their residents are telling them, which apartment homes have people who have tested positive. Some residents have left notes on their doors.

Jacobs says virus transmission is serious, but that “it’s the face-to-face interaction that is more likely to create transmission of the virus than touching the surface of a potentially infected object.”

Jacobs says his door-to-door technicians are receiving more support from residents, such as residents yelling positive comments from their balconies to them as they take trash out, or leaving them care packages at the door.

“We’re seeing the most difficulty at our mixed-use properties,” Taiyo du B. Francis, LEED GA, Sustainability Project Manager, Bozzuto Management Company, says. “Most retail tenants aren’t operating at this time, so trash pick-ups haven’t been required. However, some properties didn’t realize they were being over serviced during this time and requested payment from the retailer for trash services when they haven’t needed it.

“We’ve significantly reduced retail trash servicing at properties that have non-active tenants” Francis says. “There haven’t been any issues with residential waste yet.”

Susan Passmore, Executive Vice President, at North Carolina-based Blue Ridge Companies echoes that, “We haven’t had any change in waste quantities that I’m aware of and it hasn’t come up in internal operational discussions.”
On the legislative front, the Florida House of Representatives has passed a bill that specifies how resident’s contaminated recyclables will be managed in recycling contracts between municipalities and haulers or material recovery facilities (MRFs).