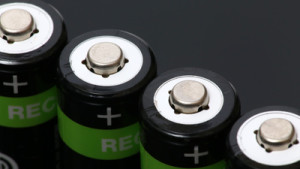 Since 1991, lithium ion batteries (“LIBs”) have grown rapidly to become the energy storage of choice for portable electronic devices. Recently, LIBs have been considered the best technology for sustainable transportation since they can provide high energy density, and power output per unit of battery mass, allowing them to be lighter and smaller than other rechargeable batteries. 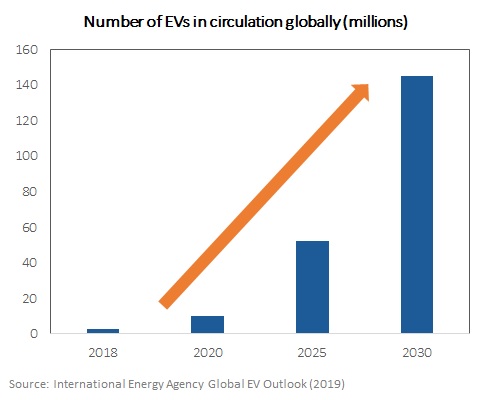 The operating principle of LIBs is based on the layered active electrode material that enables Li-ion insertion and transfer between the electrodes during discharge and charge. The working mechanism and performance of LIBs are especially dependent on the properties of the cathode material, which commercially consists of one or a handful of electrochemically active compound types containing different transition metals viz. Co, Ni, Mn and Fe in different proportions, in addition to the indispensable Li. The other main components of the LIB are graphite, Al and Cu foil, polymeric separator, as well as the electrolyte which mostly uses a high-grade lithium salt such as lithium hexafluorophosphate (LiPF6) dissolved in a dipolar aprotic organic solvent, for instance carbonates or lactones. The cathode component is composed of active lithium containing material, aluminium plate, electric conductor, PVDF binder and additives. 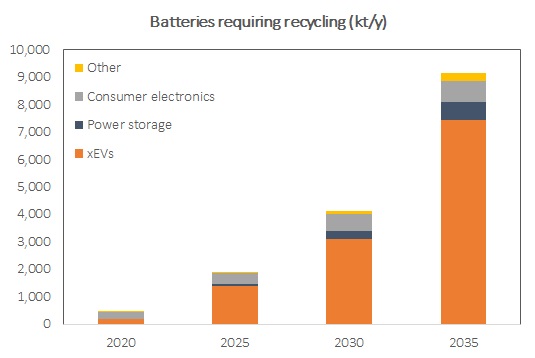 The key ingredient in a LIB is the lithium-bearing cathode material, which directly determines the safety and functional performance of the battery and represents the highest proportion of the cost of LIB materials (~40%). Thus, a significant number of researchers have tried to design processes to restore or recycle cathode materials in spent LIBs. The economic impetus for recycling started gaining particular attention in 2017 when the lithium price reached 15,000 USD/t Li2CO3. Numerous sources report that LIB disposal without recycling or proper handling can lead to severe environmental pollution and adversely affect human health due to the toxic materials used in their makeup. Treating and recycling spent LIBs is therefore essential both from an environmental and an economic perspective. Additionally, there is a supply chain impact due to the shortage in several key raw materials for cathode manufacturing. With electric vehicles (EVs) globally expected to exceed 145 million vehicles on the road by 2030, use of LIBs in EV applications is expected to be the primary driver of growth. There is subsequently a large and growing market for LIBs requiring recycling after their end-of-life, specifically from EVs (~65% of which will be from China – the largest EV market over the next 15 years). More than 2 million tonnes of spent LIB EV packs need to be recycled by 2025, representing a market value of over 10 B USD.

Hydrometallurgy is currently the main process route used to recycle LIBs. Since large amounts of chemical solvent and complicated leaching/crystallization steps are used, the hydrometallurgy process is highly sensitive to process inputs and prone to instability under feed composition variations. The industry is eager to develop more environmentally friendly and economically viable alternative processes (e.g. pyrometallurgical) to recover the lithium and other critical elements. In general, there are four types of recycling technologies developed for spent LIBs, including mechanical treatment, hydrometallurgical treatment, combination of thermal pre-treatment and hydrometallurgical methods, and finally pyrometallurgical treatment. Hydrometallurgical technologies implement physical pre-treatment and metals recovery from the separated cathode material by acid/alkaline leaching, solvent extraction, ion exchange resins and selected precipitation. However hydrometallurgical processes generate huge effluent volumes, and utilize a large amount of water, which both have negative environmental impacts. On the other hand, pyrometallurgical processes are focused on the production of metallic alloys by melting the entire spent LIB pack at high temperatures, thus consuming a significant amount of energy. While hydro and pyrometallurgy are capable techniques for now, there is clearly a dichotomy on which route is more advantageous, and the answer may be neither. As the complexity and amount of LIB applications continues to grow and evolve, these technologies need to be challenged, and the status quo should be disrupted.

With this in mind, XProEM developed a proprietary physical separation process, Variable Vacuum Vapour Extraction (V3E), and a proprietary chemical separation process, Solid-State Subtractive Metallurgy (S3M). The V3E separation process can accept spent battery packs and physically separate it robustly and safely into Black Mass which becomes a feed to the S3M process, among many other recycled components. V3E includes the physical separation of spent LIBs to recover the valuable components by using vacuum treatment to extract and recover volatile matter such as electrode binder, electrolyte solvent and salt. It is then followed by shearing and crushing steps which disintegrate the electrolyte-depleted battery pack. The subsequent comminution can further reduce the size of shredded particles of enclosed components such as the casing, current collectors, separator and other materials, which are separated using a series of physical separation techniques thereafter. 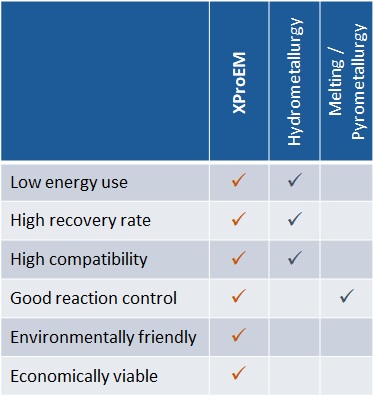 XProEM’s S3M process provides a uniquely sustainable solution to tackle the imminent problem of recycling large amount of spent LIBs by directly recovering battery precursor materials into their metallic forms via a solid-state reduction process. Clear advantages of solid-state reduction have already been proven for other transition metals. These include elimination of hazardous solvent consumption, low energy and water consumption, low operating expenses and capital costs, modular setup and scalable as needed, increased operational reliability and a lower maintenance requirement, flexibility in accepting feed material, and high recovery and purity (up to 95% can be readily achieved). As the XProEM process is operated in solid state, it is expected to consume much less energy than current recycling processes and eliminates the requirement for toxic solvents and treatment of hazardous wastewater. The process is compatible with various LIB types, and allows for efficient recovery of waste battery materials into high value products. The XProEM process effectively lowers the energy and consumable cost by 55%, lifting the gross operating margin to 45% (compared to 20-25% for pyrometallurgical and hydrometallurgical processes).

The target customers for XProEM’s technology solution are LIB manufacturers, EV manufacturers, and companies who collect and dismantle used electric cars or those in the municipal/electronic waste recycling business.

XProEM has currently completed all the required technical validation stages including: 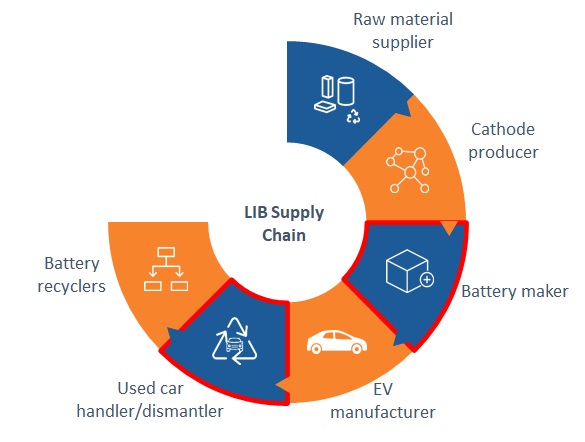 XProEM has begun the setup for a pilot plant facility that is expected to commence operations by mid-2021 to produce the first batch of sellable products. In addition to completing the important milestone of technology commercialization, the pilot facility will also allow XProEM to test the robustness and efficiency of XProEM’s technology against feed materials of varying composition and impurities provided from suppliers and supply chain partners, requiring customized design and adjustments to both process conditions and the equipment configuration. XProEM also plans to complete a pre-feasibility study on the process by end of 2021, which will further validate the financial viability of the proprietary technology under commercialization under various market conditions and financial assumptions, and eventually move on to the design, engineering, construction and commissioning of the first operational commercial facility by 2022. Once that first small-scale commercial facility has been built and operated successfully, it will serve as a demonstration plant for XProEM, allowing us to work with more partners and clients for scaling up the large commercial plant at a required capacity of up to 50,000 t/year of LIBs. The implementation of the first large commercial plant can commence as soon as late 2022.

XProEM strives to lead the development of regional & global industry standards for LIB recycling, and build an independent and complete technical system for LIB recycling. Additionally, XProEM will also focus on the future of LIB recycling by converting innovative R&D work into a strong IP portfolio to safeguard its competitive advantage over its peers. The key pipeline of such projects include expanding R&D activities to improve and develop recycling technologies compatible with future LIB types (LFP, Li-Air, Li-S etc) and also to develop cathode restoration techniques, among others. For cathode restoration, the key question is whether we can restore cathodes back to their original electrical performance and skip the recovery of individual components altogether. Restoration can be achieved by doping the spent cathode with a lithium-rich compound with other key additives, and subsequent heat treatment to restore the original crystal structure of the cathode and thereby restore its original electrical properties. With this is mind, XProEM is currently developing another proprietary technology – Diffusion Driven Doping Restoration (D3R). D3R is a process for directly replenishing lithium for lithium-depleted cathode from spent LIBs to restore the stoichiometric amount of lithium in the restored cathode. The re-lithiation is accomplished by doping with lithium-bearing compounds to provide the source of lithium, and diffusion of lithium from doping material into spent LIB cathode. Restoration technology has gained widespread attention from both academia and industrial experts since it can further lower the cost of producing cathode material, allowing LIBs for EVs to remain cost competitive against traditional combustion engine vehicles.

In summary, XProEM is ready to disrupt the status quo and committed to developing truly sustainable technologies in LIB recycling. As the first of a series of upcoming technologies, XProEM has developed a closed loop, environmentally friendly and economically viable solid state subtractive metallurgy process to tackle the imminent problems in LIB recycling, that can extract and recover battery components in an environmentally friendly and low-cost manner. With an experienced team and technology commercialization expertise, there is a strong synchrony between XProEM’s technology and wave of retiring LIBs.