The management of plastics and the “actions” of the Attica prefecture 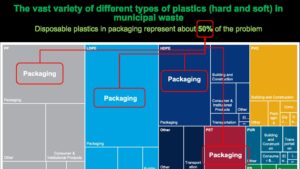 Sustainability has become perhaps the most critical issue facing the plastics industry and is reaching an unprecedented level of global – public, corporate and governmental – awareness and concern. From a value chain perspective, plastics producers, processors, brand owners and the financial community all have an interest in playing an active role.

The plastics and chemical industries are under increasing public scrutiny due to the accumulated plastic waste in the ocean from their uncontrolled release into rivers and oceans, especially in Southeast Asia. Various scientific reports of microplastics entering the biological food chain raise further concerns for the public. The impact of uncontrolled plastic waste management after initial use is eroding the public image of chemicals and may even cause “social authorization”.

Simply put, the future of the plastics industry and its “social license” is based on how stakeholders respond.

The challenges are huge as the full development of the three critical corners of the plastic recycling triangle – collection / sorting, processing, and end-use application – remains in early development. Today, many collection systems are under financial pressure and flooded with waste volumes of all materials (glass, plastic, paper).

Sustainability goals, when set, are often without a fundamental understanding of the potential of existing infrastructure. For example, Europe, which is considered to be the most sustainable-advanced region on the planet, should substantially double its infrastructure capacity by adding around 300 recycling facilities and 300 for sorting, requiring around € 1.5 billion a year by 2026 for funding to achieve the goals it has set.

In particular, the strategy set by the European Union stipulates that all plastic packaging available on the EU market will either be reusable or can be recycled in a cost-effective manner. The main goal of the vision, however, predicts that by 2030 at least 55% of plastic waste produced in Europe will be recycled.

According to a recent study by IOBE, Greece ranks last among EU28 countries in terms of solid waste management as most solid waste is disposed of in landfills while reuse and recycling are extremely limited. Greece came second from the end in solid waste recycling in the European ranking for 2020.

Consequently, the Greek economy relies almost exclusively on prime, and in many cases imported, raw materials, resulting in a low ranking of cyclical indices, resulting in the loss of significant opportunities for the creation of domestic added value and employment

In 2019 Neste Oil, the world’s leading provider of renewable diesel, renewable jet fuel, and an expert in delivering drop-in renewable chemical solutions, and Remondis, one of the world’s largest privately owned recycling, service and water companies, have signed an agreement to collaborate in the development of chemical recycling of plastic waste.

This collaboration will assist the Helsinki prefecture in achieving EU’s 2030 recycling targets. The goal of this partnership is to achieve the recycling / conversion of one million metric tons of plastics per year into chemical naphtha (which will be used to produce plastics) in the company’s refineries by 2030.

The effort to transition to a form of circular economy is already at the heart of the strategic planning of the Attica prefecture. The region is already planning and implementing interventions so that plastic waste is converted into resources that can be utilized by the domestic plastics industry while maintaining and strengthening both its competitiveness and its contribution to the Greek economy. The main points of the roadmap set by the Attica prefecture for the strengthening of recycling in general and the transition to a circular economy are:

The strategic planning for circular economy and the management of plastic waste of the Attica prefecture will be the central pillar that will be followed by all other regions of Greece.