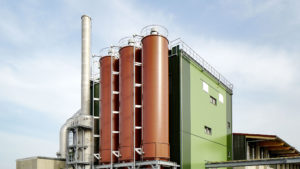 After a 20-month construction period, the first production plant for phosphate-containing mono and complex fertilizers made from recycled sewage sludge ash was put into operation. Seraplant operates the new plant at its headquarters in Haldensleben, Saxony-Anhalt, Germany. Glatt Ingenieurtechnik was responsible for the process development and construction of the fluid bed plant. The official commissioning on May 31, 2021 was also attended by Prof Dr Armin Willingmann, Saxony-Anhalt’s Minister for Economics, Science and Digitalization.

Seraplant invested more than 20 million euros in the realization of the new production facility with the support of the state of Saxony-Anhalt. More than 20 new jobs have been created in the southern port of Haldensleben. The aim is to produce 60,000 metric tons of phosphate fertilizer per year – ready for use, commercially available and in compliance with the German Fertilizer Ordinance (DüMV). Customers adressed by the company are agricultural enterprises of conventional and organic farming, agricultural and horticultural wholesalers as well as the fertilizer industry.

Seraplant and Glatt have jointly developed the patent-pending production process. It bridges the gap in the phosphorus cycle by combining phosphorus recycling with a manufacturing process for new fertilizer, resulting in products that can be marketed straight away. Glatt was commissioned by Seraplant to plan and implement the complete plant technology – from raw material delivery to suspension preparation and subsequent fluid bed granulation to filling of the ready-to-use finished fertilizers. The scope of services included process development, overall planning, supply of the entire process equipment and ancillary systems, as well as assembly and commissioning.